Swing Thoughts – What do you see when you are swinging?

Home » Header » Swing Thoughts – What do you see when you are swinging?

Here is a tip that dropped several strokes off my round.

A few years ago I noticed that my ball striking was OK, I didn’t lift my head up (to be covered soon) and I made solid contact with the ball. I was very inconsistent in the ball direction. I was aiming my feet, shoulders and rest of my body correctly, but the ball would go a little left, or a little right of where I was aiming. Nothing drastic, but just not consistent.

Here is what I found, while I was aiming my body, I wasn’t aiming the ball.

Besides finding a repeatable pre-shot routine, I developed an imaginary yellow arrow that helps me understand what the club will be doing at and after impact. Prior to using this technique, I realized that I was going to hit the ball, but after that I really didn’t know what was going on. By envisioning this yellow arrow as my club head path, it creates a direction for the ball to follow. You will still hit the ball, but by imagining the club head continuing down this path you will tend to hit the ball more down the intended target line.

This graphic is mainly for iron shots. In another post I will bring back the yellow arrow and discuss my swing for a drive. 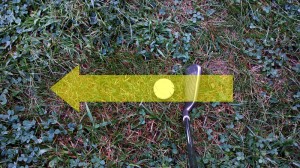