Need some ideas for fun scramble games for your golf outing?

Home » Header » Need some ideas for fun scramble games for your golf outing?

For what ever reason you’ve decided to have a golf scramble. Now you are looking to make your outing more entertaining.

You’ve come to the right place. Here is a list of fun games to play during your scramble. Pick some or all of them, I enjoy doing a few of these, but not more than 3 or 4 in a round.

Each team gets the same amount of string. We usually use about 10 feet. The amount doesn’t really matter as long as they are all the same. During play you get to use string as a stroke. For example everyone misses a putt and the closest is only a few inches from the hole. Pull out the string, measure from the edge of the ball to the edge of the cup. Cut the string and keep the unused portion. This effectively puts the ball in the hole without adding a stroke. Use the string to get out from under a tree, out of a bunker or out of mud. The fun comes at the end, if there is a tie for the low round, the group with the most string wins.

Similar to the string once per 9 holes the group can decide to hand toss the ball. It doesn’t count as a stroke. As a group the decision is made to use the toss, it can be from a few feet and just drop in the hole or from off the green to try to tuck it up close. Choose your own rules, but the person should be standing. No getting on your knees. You will be very surprised on how difficult it is to judge distance if trying to roll it on the green. This can be used in the fairway, from the rough, or from behind trees, use it anywhere.

Closest to the pin

Longest drive is often found par 5s but can also be used on long, straight par 4s. Again, ask the course if they can supply the little signs. 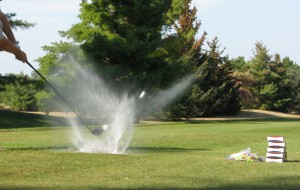 At first I had trouble with this one, but it was pretty fun. Tie 3 small water balloons together and set them up in a small pyramid. Use this as the tee. This makes quite a splash. This is best done on the first tee when everyone can watch.

One drive (tee shot) from each/One putt from each

Choose one or both of these to add an interesting twist. For each 9 holes, you must use one putt and/or drive from each player. For example, if you are on the 9th hole and you have one player that you have not used their drive (or any shot from the tee) then you must use it. This adds some level of strategy. If you have a player that is not very strong, and they hit an OK drive, you just may want to choose it so it doesn’t come down to the last hole. 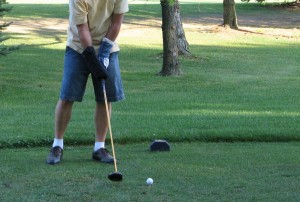 On year we had a hole that the players had to tee off with oven mitts on. It is very difficult. I highly recommend staying out of the way. Sometimes the club can go flying.

Another option for a hole is to play it as reverse scramble. For this game you must play every shot from the worst location, including putts.

One club for that hole

This one is another that fits into the strategy category. For that hole, if you use a players drive, then they are out for that hole. Then the second shot person gets to sit out with the tee shot person. Options are the last player standing gets to hit all remaining shots, or after the fourth player is out all of the players get to play again. Decide as a group or let the organizer decide.

I hope you find this list interesting and that it generates many great stories! Please comment or send us a note if you have more games to add!

Her are a couple of fun things to do:

Prize for “Most Honest”, or worst score

As the organizer, surprise the gang when you are handing out prizes. Give one for the “Most Honest”, in other words the group that had the worst score (last place).

One team different number of players

If you have a team that has an odd number of players, decide if they get to hit an extra ball by one person per hole, or if they rotate. It is good to decide before the round. There is nothing more frustrating than not knowing what to do and causing arguing or bad feelings. Decide before that group tees off.